Keyframe spans and animation bars have a gap if property values are not changing, so it is easier to see where the actual animations happen. 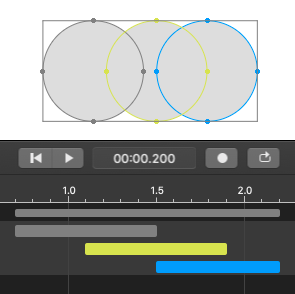 Symbol instance timing has been made more flexible. In previous versions, all symbol instances played the same animation at the same time at the same speed. In this version, it is possible to change the symbol instance start time and duration. Note that SVG symbols don’t have native support for this feature, so the SVG exporter automatically detaches the instances to make this possible. The downside is that the exported SVG document file size becames larger.

The SVG importing has been made cleaner. All <use> elements referencing non-symbol elements are replaced by their content to make editing them easier. The Object Tree doesn’t show <symbol> or <defs> elements anymore. Symbols can still be seen in the Symbols Panel.

Other small changes are alpha value support for stroke and fill colors. Easing names are visible by default in the timeline. The timeline displays seconds and fractions of seconds. Also, the symbol icon looks again more like a symbol. See the release notes for all changes and fixes.

There’s also new versions of Lottie and AVD plugins. Don’t forget to update them to use the latest features.